Australia currently uses The Kennel Club (Great Britain) standard for Irish Softcoated Wheaten Terriers which varies in many aspects from the US, Canadian, and Irish (F.C.I.) standard. The FCI Standard is the international standard for the Irish Softcoated Wheaten Terrier and is the breed definition that SHOULD be in use in Australia. It is the standard of the country of origin of the breed and Australia is an associate member country of the FCI. Australian breeders are currently lobbying the Australian National Kennel Council to change the standard recognised in Australia to the FCI standard.

Wheaten Terriers were always used by small farmers to kill vermin or help with the work about the farm. They were used for a long time in the difficult job of hunting badgers and otters.

The history of the Irish Softcoated Wheaten Terrier has been somewhat obscured by its closeness to the other Irish Terrier breeds. The Wheaten is probably the oldest of the four breeds. Its existence for at least 200 years can be inferred from textual references to "soft-coated" dogs. The relation of the modern Irish Terrier to the Wheaten, though less well documented, appears to have been the result of deliberate breeding experiments. So the humble Wheaten probably has a fairly mixed ancestry. Despite the long history of the Wheaten, it wasn't until 1937 that the Softcoated Wheaten was officially recognised by the Irish Kennel Club. The breed has grown steadily in popularity since and is now well known world-wide.

A hardy, active, short coupled dog, well built, giving the idea of strength. Not too leggy nor too low to the ground. 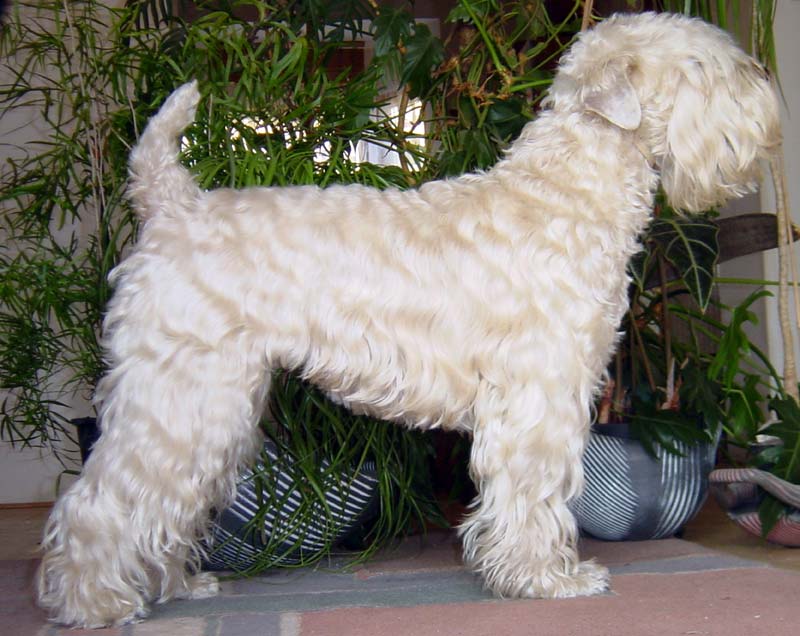 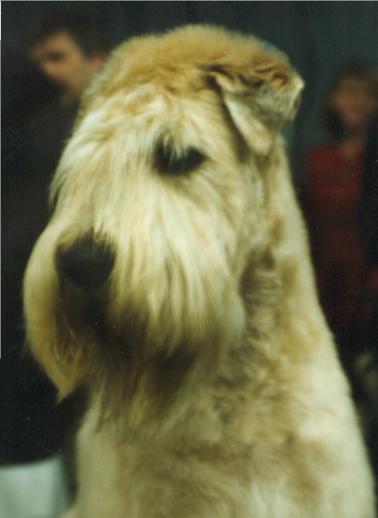 Spirited and game. Good tempered. Most affectionate and loyal to his owners. Most intelligent. A trusty, faithful friend, defensive without aggression.

HEAD: In general powerful without being coarse. Long, in good proportion to the body. Hair same colour as on body.

CRANIAL REGION
Skull: Flat and clean between ears, not too wide.
Stop: Defined

FACIAL REGION
Nose: Black and well developed.
Muzzle: Foreface not longer than skull.
Jaws: Jaws strong and punishing.
Teeth: Teeth large, regular; scissor or level bite, (i.e. edge to edge) neither undershot nor overshot.
Cheeks: Bones not prominent.
Eyes: Dark, dark hazel, not too large, not prominent, well placed.
Ears: Small to medium, carried in front, level with skull. Dark shading on base of ear allowed, and not uncommon, accompanied by a light wheaten coloured overlay. This is the only area of the dog where under-coat is allowed. "Rose" or "Flying" ears are objectionable.

NECK: Moderately long and strong but not throaty.

BODY: Compact. Not too long. Length from withers to base of tail approximately the same as from ground to withers.
Back: Strong and level with even top line.
Loins: Short, powerful.
Chest: Deep, ribs well sprung.

TAIL: Well set, not too thick. Carried gaily but never over the back The tail is docked so that two thirds of its original length remains assuming it is in proportion to the dog. An undocked tail is permitted.

HINDQUARTERS:
Well developed with powerful muscle.
Thighs: Strong and muscular.
Stifles: Bent.
Hocks: Well let down, turned neither in nor out. Hind dewclaws should be removed.

HAIR:
A single coated dog. Texture soft and silky to feel and not harsh. Young dogs excluded from this. Trimming permitted.
Trimmed dogs Coat cut close at neck, chest and skull, and left especially long over eyes and under jaw. Whiskers encouraged. Profuse feathering on legs. Body coat trimmed to follow the outline of the dog but not sculpted. Tail trimmed close and neatly tapered.
Untrimmed dogs: The coat at its longest not to exceed five inches (12.7 cm). Soft, wavy or loosely curled with the sheen of silk. Under no circumstances should the coat be "fluffed out" like a Poodle or an Old English Sheepdog. Dogs shown in this condition should be heavily penalised as they give a wrong impression of type and breed. Special attention is drawn to puppy coat development. Pups are seldom born with the correct coat of maturity, care must be taken when assessing this point. They go through several changes of colour and texture before developing the mature adult coat. This usually occurs between 18 months and 2˝ years.
Pups: Are seldom born with the correct colour or texture of coat. They come reddish, greyish and sometimes clear wheaten. The masks are generally black. Sometimes there is a black streak down the centre back or black tips to the body coat. These dark markings clear away with maturity.

A good clear wheaten of shades from light wheaten to a golden reddish hue.

Any departure from the foregoing points should be considered a fault and the seriousness with which the fault should be regarded should be in exact proportion to its degree.
o Nose any colour other than black.
o Undershot mouth. Overshot mouth.
o Overall mature coat not clear wheaten colour.
o Nervousness. Viciousness.

Dogs carrying any of the above eliminating faults should never be bred from.

Tchoklat Wheatens are registered breeders of pure bred dogs in Australia and we are committed to breeding healthy dogs that will be around until old age. We have done this through a program of sound imports, and equally sound breeding decisions, using only health tested dogs with a clear health lineage.

"In a word, yes, I would say not to breed close relatives of affected dogs".
Dr Meryl Littman (U.Penn)